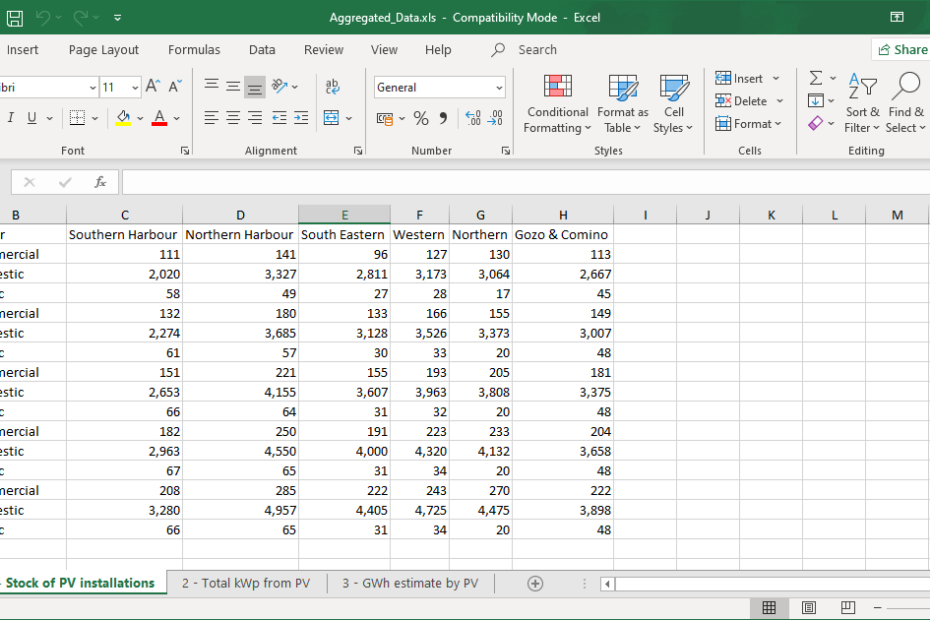 This latest series of articles are related to three simple data related techniques that involve basic data collection, querying using SQL (Standard Query Language), and data visualization. This latest series requires the software listed at the end of this article.

Renewable Energy is a topic that has gained a lot of importance in recent years.  This is so, as the world is coming to terms with decisions that have harmed the environment quite drastically.  In this article, official data related to renewable energy generated from Photovoltaic Panels (PV) in Malta is going to be used.

Disclaimer – The data used may contain incorrect data as there were several discrepancies in the original files which could not be verified.

The Photovoltaic Panels data was obtained from three (3) separate files from Malta’s National Statistics Office, through the following link.

Given that the files did not contain large amounts of data the amalgamation process was done manually (typically this process would require an automated tool in order to correct/avoid mistakes and to be more efficient).  The numerical tabular data in T1, T2, T3, and T4 from the original 3 files were copied into a single file (Aggregated_Data.xls) with 3 different tabs.  The different tabs contained the following data:

There are various possibilities of loading data from a Microsoft Excel file to a Microsoft SQL Server. In the below section a demonstration of how to perform such an operation using an inbuilt tool wizard and an SQL based query are included.

Loading the data from the Microsoft Excel file (Aggregate_Data.xls) to our database instance (LobesLab) requires a number of steps as described and shown below:

Following the execution of these steps the data in each Microsoft Excel tab should be successfully loaded into a new table within the selected server and database.

If you encounter the Cannot create an instance of OLE DB provider “Microsoft.ACE.OLEDB.12.0” for linked server (null) you are to execute the below code:

You are to execute the below code that essentially creates a new database named PVData, changes the scope to the PVData and executes an ad-hoc distributed query that takes all the data from the Microsoft Excel file name Aggregate_Data.xlsx within the ‘1 – Stock of PV installations’ tab and copies it to a table named Data1.

In order to follow through this article the following tools are required: